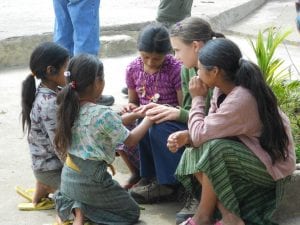 The first time I visited Villa Nueva, and more particularly the town that Jorge Cerritos Jr. and his family calls home, Linda Vista, I was amazed at the raw poverty that surrounded me. The roads were terrible, the smell was foul, and all throughout the surrounding community there were apparent signs of desperation on the faces of the adults and children alike.  “These people are lost ”, I thought to myself. In participating in the celebrate recovery ministry as well as working in medical clinics in local schools I couldn’t stop thinking about how much there was to do, and how many people needed help. One of the most amazing and unfortunate things I learned is that at some point in the education process, spots in the local public schools become a lottery. This is where corruption often infiltrates the system and people with the desire to go to school are often left without an opportunity to succeed.  As I returned home, I couldn’t help but ponder almost continuously about the state of that

community. How many more communities just like that are there in this world? And then it hit me like a smack in the back of the head. I actually remember the exact moment it hit me. I was on a video chat with Jorge Jr’s brother Gerson and his wife Crystal, discussing their involvement in one of our upcoming trips. Crystal made a comment at the end of our conversation that opened my eyes. She said, “… Gerson and I are just glad that God has put us here to serve. We know that there are communities all around the world, even in the US, that need Jesus, just like Villa Nueva.” 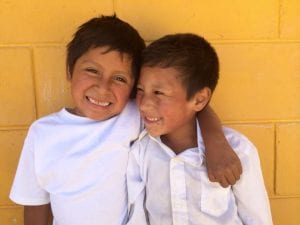 Why had I not thought like this? It seemed so obvious. In fact, it seemed so completely obvious that I was almost ashamed of my thoughts in those moments when I was working in Villa Nueva. Villa Nueva’s greatest need isn’t for food, or school supplies, or sturdier houses, or even for a clean up project. THEIR GREATEST NEED IS THE GOSPEL !!! But this was only the first half of my epiphany. My second realization was that Villa Nueva is no different than my home town of New Market, Alabama, or any other place on this planet. WE ALL NEED THE GOSPEL !!!

Selfishly I was looking down on this place as if I was from a place that was much better than this, that did not have such rampant problems. And I could not have been more wrong. The problem isn’t lack of family, or money, or even education. The problem is SIN. And sin exists everywhere. Whether your struggle is battling addiction or it is getting away from identification in material things we are all alike, we are all human, we are all depraved. We are all in need of identification in HIM to alleviate all of our pain. The greatest thing about the gospel is that by identifying ourselves in Christ we can rejoice in the midst of chaos.  “I have said these things to you, that in me you may have peace. In the world you will have tribulation. But take heart; I have overcome the world.”- John 16:33

Growing up in church I can remember learning about Missionaries like Lottie Moon. I can even remember hearing a few speak in our church on Sunday nights. I also have very vivid memories of times at church camp or Sunday morning service where someone would come down to the front to talk to the pastor and make a profession of faith. The pastor would announce that that person had felt “called” by God. Most of the time it was to go to seminary, become a missionary, or even get more involved in church. As a young boy I remember consciously putting people into three categories. First were people who did not believe in God or attend church. Second were those who believed in God and went to church. And Third were those who were “called” to be a part of the church leadership or to spread the Gospel. That is how I understood the concept of being “called”, or at least I had not thoroughly thought about the concept until I began working in Missions. The pastor at my current church said this not too long ago and I think this sums it all up quite nicely.

“If you have a pulse, YOU ARE CALLED.”- Paul Whaley

We are all called to be representatives of God. Whether we are working in a restaurant, as an engineer, doctor, lawyer, janitor, pastor, professional athlete, or taxi driver. The deed of spreading the good news is not limited to full time ministry personnel, nor is it limited to a place. 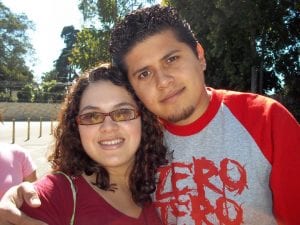 Jorge Cerritos, His wife Shirley, and their entire family undoubtedly live in an impoverished area. They see people that don’t have homes or even kids without parents roaming the streets.  But Jorge Jr and his family don’t work tirelessly in their community to feed the hungry, care for the sick, and watch over the fatherless for their own personal gain. They do it because they are CALLED, just as we are, to spread the good news of Jesus Christ, and they are a great example of how God can do amazing things we we trust wholeheartedly in him.